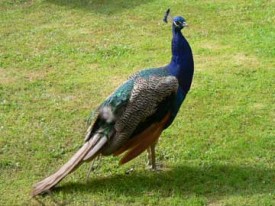 Charles and his brothers were rescued by the Sanctuary from a farmer that was selling his property and had decided to shoot the peacocks. We immediately offered to take four, and were shocked to receive them tied up in brown canvas sacks with only their heads poking out. We set them free around the property, […] 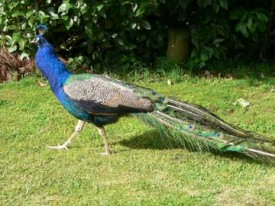 Peacocks are the national bird of India, and were once only owned by Indian maharajas, so we have given our peacocks royal names as well. William, as the heir to the throne, is the most noble of the three, with a full, long set of tail feathers that he raises in full display, even though […] 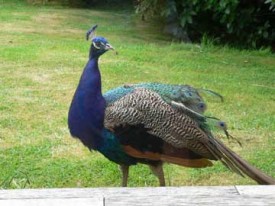 Harry is the inquisitive one out of our three peacocks, and spends most of his time hanging around in the backyard, looking through the windows into the house to see if anyone is around. He is also close friends with William, and the two of them eat, sleep and cause mischief together – as young […]