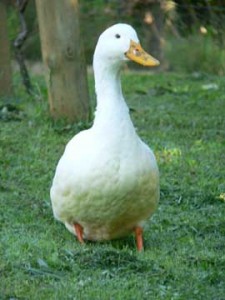 Dibbles is a domestic duck that came to us after being badly mauled by a dog. But now that his feathers have grown back in, he loves to take swims and you will even find him soaking in his water bowl. Dibbles has made a fantastic father to several groups of wild ducklings that he […]

Dick, like Dibbles, is a domestic duck, and was therefore bred by humans for meat and down, and can’t fly. Dick wandered into traffic, was hit by a car, and was found on the side of the road with his beak split right down the middle. With the help of some Super Glue, his beak […] 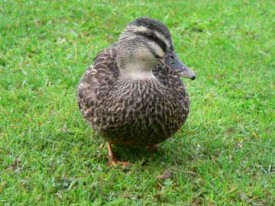 Peg is a wild mallard that lives in the duck pond on the property. Peg’s left leg was broken after a bad landing and was amputated below the knee. But she certainly hasn’t let this slow her down. Peg still loves swimming with all her friends, and waddles over, a bit slower, but still quite […] 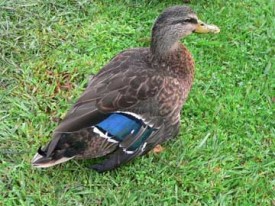 Wilma was born and raised on the Sanctuary by a pair of wild mallards, and from an early age developed a wing deformity that meant she could not fly. She is quite an outspoken duck, and is often leading the other ducks along, quacking loudly, and foraging throughout the day with them for seeds, grass […]

Betty is a wild mallard who suffers from severe arthritis. This is not an uncommon problem for ducks, and treatment normally entails having an orthotic put on the leg to straighten it out. However after two unsuccesful treatments, Betty is still unable to stretch out her leg, and instead hops around on her left foot. […]